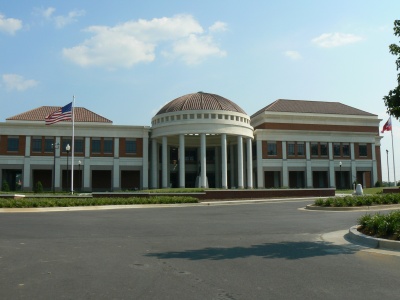 The brand new National Infantry Museum will have its grand opening June 19th, 2009.     General Colin Powell will be on hand to dedicate the 85 million dollar facility sitting on 200 acres.

This is a world class museum built to honor the men and women who have fallen defending our country.   It features a beautiful IMAX theatre, world class museum, several exhibits including the feature exhibit "The last 100 yards" which uses cast figures of real infantry soldiers along with the Huey Helicopter and the Bradley fighting Vehicle to depict scenes of taking of the last 100 yards in Battle.

The Museum is on the South side of Columbus just on the edge of Fort Benning.   It is across from Oxbow Meadows on South Lumpkin Rd.

Local Businesses like Synovus and Aflac have donated heavily to make the Infantry museum a success.  It is worth our time to see what the soldier on the ground goes through in Battle!

We visited the museum on 15 Dec 2010. It is very well done and educational. Our grandson was graduating from his basic infantry and AIT on the 16th. We were able to take him on the tour also. We also ate at the restaurant. The food was excellent but a little overpriced for the fare.

How to Sell your Home Quick!

Recently we have had several homes that just sold immediately.    So, it brought to mind why these homes sold so fast while other homes languish on ...Read More

NorthStar Crossing - A brand new subdivison only 4 miles from the Main Gate of Fort Benning is having their Grand Opening week this week!!    Ribbon ...Read More

Callaway Gardens in the Fall

Fall is the perfect time to enjoy the outdoors in Columbus, Georgia. What better place to experience all the sights and sounds of the region than at ...Read More